The “Religion of Imitating the Victor” 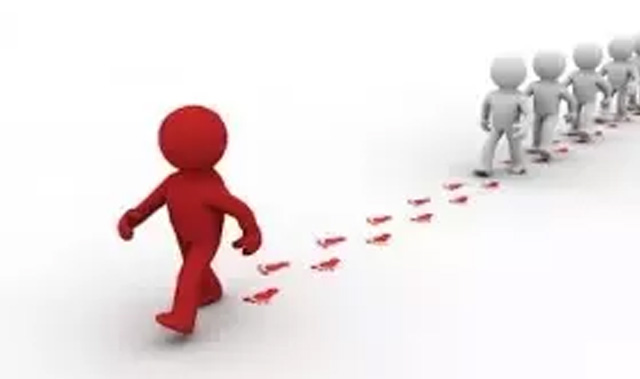 The following is an excerpt from the book “The Muslim Woman: Journey into the Light – Volume 1” by Imam Abdessalam Yassine, translated from Arabic by Farouk Bouasse. It is about the Prophetic Method and the “Religion Of Imitating The Victor”.

The Way of Faith is an arduous, ascending path, the most difficult part of which is the psychological obstacles which can only be overcome through the virtue of patience. The Way of our base passions and Satanic impulses, on the other hand, is an easy path descending directly and precipitously to the bottom of the abyss. And then there are the worldly, exterior obstacles strewn forth by adversaries and allies alike, arising from our urgent economic and medical needs and the challenges occasioned by our societies’ underdevelopment.

The Muslim woman faces a double obstacle, stuck between a voice prompting her to do good deeds and another trying to thwart her aspirations. This second voice is firmly entrenched in those customs and an ossified and overly-stringent fiqh[1] from our centuries of decline which have embedded in her a feeling of inferiority and impotence, undermining confidence in herself and her Lord, severing her from any sense of responsibility outside the very restricted sphere of her private life.

The other voice which is motivating her comes from pristine Islam; for too long, it has been very faint but today can be heard by both men and women who, when they are awakened by this appeal, are then prompted to ask, “Now what?”

In the previous section, we read how God exhorts His servants, both men and women, to brave the obstacles, to overcome the formidable adversities, to exert one’s utmost efforts to ascend the arduous path, armed with self-control and the dauntless will to move forward. To brave the obstacles means to keep oneself from evil and urge oneself to do good, for the destination is none other than God the Exalted. The goal is to gain His satisfaction. The reward is the highest place in Paradise. The touchstone is reason and Islamic Law. And the Law is a way and a method. So now what?

Virtue is worth nothing if the servants of God do not manifest it in deeds acceptable to Him – but of course He accepts “from those who are wary of Him (muttaqūn).” And muttaqūn is a plural word, encompassing both the male and female faithful “who believe in the Unseen, establish the prayer, and spend out of what We have provided for them, and who believe in the Revelation sent to you [Muḥammad], and sent before your time, and are certain of the hereafter. They are on true guidance from their Lord, and it is these who will prosper.” (2:2–4)

Open your Qur›ān, sister in Islam, and read the opening verses of Sūrat al-Baqara cited above: you will see how the pious are defined as those whose righteous deeds are crowned by a certainty in the Hereafter as opposed to some vague, indefinite beliefs.

Those who are certain of the Hereafter, women and men, are always earnest: they take extreme precaution to ensure that their works are not in vain. They revere the Lord and do right so that their deeds may be inscribed in the record of accepted deeds. Not only that, they always seek the best of deeds, i.e., the fundamentals of jihād.

Even if every single Muslim attained the highest degree of God-wariness and exerted their utmost efforts in doing righteous deeds – but did so only as individuals and failed to form a collective, pro-active (iqtiḥāmiyya) force (which of course entails women being active partners with men), they would have failed to achieve the rank of jihād, thereby depriving the of its rightful position. umma

But why a pro-active (iqtiḥāmiyya) force? First, in order that I as an individual may be granted the highest rank before God. Having a community that has been spiritually educated, is well-organized, is trying to take the steep path, and that finally achieves worldly victory is of no concern to me if it is not bringing me closer to the Divine. That ought to be my prime concern, first and last. Only after that should I spare no effort in diligently contributing to the achievement of the umma’s renaissance project. At the same time, I need to take heed of my ego’s temptations lest my deeds ever go in vain.

The logic of piety in the verse “and are certain of the hereafter” and the logic of in the verse “but those who strive has He distinguished” mark out the lines of the ascending path. Having been assured by the Book of God (Exalted is He) that we have a duty to boldly tackle this obstacle, let us now look to the Prophetic guidance for a practical way (jihādminhāj).

Our way or method (minhāj) is the Prophetic Sunna, as noted by the Companion ‹Abdullāh Ibn ‹Abbās (God be pleased with both of them). The word minhāj can be found in the following ḥadīth:[2]

Al-Ḥāfiẓ[4] al-‹Irāqī declared the chain to be sound. Therefore, we must believe that another khilāfa will come to pass, no matter how long it takes, no matter how arduous the path to it.

We now come to the second theme of this chapter – the Religion of Imitating the Victor. It is a priority for us to delve deeply into the psychological obstacles within ourselves as individuals and within our umma as communities. By this I do not mean that we should step out of society and enter a quiet clinic until we have cured ourselves and our society of its illnesses; what I mean is that, even while the course of life is flowing and the wheel of history is turning, we should focus on these issues. God (Exalted is He) has said: “Not equal are those who sit (at home) and those who strive in the cause of God.” (4:95) The procession won’t wait around for you, so if you lag behind, you’ll perish!

The phrase “the religion of imitating the victor” was coined by Ibn Khaldūn (God have mercy on him) who perspicaciously observed in his Muqaddima (the Preface to his History) that “The vanquished always wants to imitate the victor in his distinctive characteristics, dress, occupation, and other customs,” arguing that “the reason for this is that the human being always sees perfection in the person who is superior to him and to whom he is subservient. The former considers the latter perfect, either because of the genuine respect he has for him, or because he erroneously assumes that his own subservience is due to the other’s perfection and not his own weakness. When that erroneous assumption fixes itself in the soul, it becomes a firm belief, leading the vanquished to adopt all the manners of the victor and to assimilate himself to him.”[5]

To this phenomenon of imitation among the vanquished I would add: a subservient culture, a colonized economy, and a deterioration of morals.

In another chapter of his Muqaddima, Ibn Khaldūn (God have mercy on him) talks of “the Religion of Yielding,” by which he means the tendency of people to yield to their despotic rulers, a tendency that is inherited by successive generations, one after the other, who live under the yoke of rapacious monarchies and dictatorial regimes until such subservience becomes so firmly established in people’s minds that they wouldn’t even dare think of doing otherwise.

The two illnesses afflicting the body politic of the umma have merged into one greater malady: one inherited from the centuries of our historical decline and the other occasioned by European colonialism. These two “articles of faith” have combined into one creed, the religion of yielding to local despots and the religion of imitating the foreign victor, as our wise Ibn Khaldūn has laid out. One illness and one creed that dwell in our umma’s body, mind, and soul.

Our history books and the collective memory of the umma relate the great wrongs and atrocities perpetrated against us by colonialism. Alas for Muslims in these grievous days when their brothers and sisters around the globe are suffering criminal aggressions that the pen is powerless to describe!

With the passing of time, the immediate influence of the victor’s civilization fades, but the psychological and cultural wounds remain. The vanquished first accepts the victor’s culture only begrudgingly, then self-deceivingly justifies it, and eventually adopts it as their own conviction and raison d’être. Such are the residues of colonialism, dwelling within us, stacked one above the other.

These elements of imitation abide in the innermost depths of the Muslim’s psyche, alongside their personal passions and the evil thoughts inspired by demons. God’s Messenger (God bless him and grant him peace) forewarned Muslims against imitating the unbelievers in numerous ḥadīths, counted by some scholars as up to eighty.

“The religion of imitating the victor” is a defeatist propensity, present even when the victor is not actively planning to indoctrinate the vanquished. So how much more powerful is contemporary colonialism if it has a deliberate plan for cultural, economic, and political conquest, and to that end has at its disposal the mass media and all its financial and military instruments?

How much more powerful is it if it has agents from among us, men and women, who are imbued with its doctrines, customs, and thoughts, and who are loyal only to it, notwithstanding their claims of being patriotic and of supporting the cause of their own people?

Secularized modernity before religion! That is the message of the victor echoed in our countries by his agents. But God – our Lord – calls on us to overcome life’s obstacles while His Messenger (God bless him and grant him peace) outlines the Method which promises right guidance for the umma and victory and prosperity for the pious. So what is the position of the sister in faith vis-à-vis this pro-active force? What is her contribution to the jihād? What is her share in carrying this heavy burden?

[2] [Translator’s note:] Ḥadīth (pl. aḥādīth), lit. a saying, is used as a term to denote, individually and collectively, the sayings, actions, and tacit approvals of God’s Messenger (God bless him and grant him peace). The ḥadīth constitutes a textual source for the Sunna, the Prophetic Tradition, which serves as a source of Islamic Law alongside, yet secondary to, the Qur›ān.

[3] [Translator’s note:] ‹Āḍḍ, lit. biting, mordacious, meaning a rule in which the rulers are avaricious for power, cling to it and exercise it by any means, however cruel and illegitimate. “Rapacious monarchy” refers to the rule of the dynastic rulers who would come to power after the four rightly-guided Caliphs – Abū Bakr, ‹Umar, ‹Uthmān and ‹Alī (God be pleased with them) and who transformed the system from one in which the caliph was elected by consensus of the leading figures of the umma to hereditary rule whereby the king forcibly commanded the allegiance of the umma. The most enduring of the dynasties who ruled in the heartlands of Islam were the Umayyads, the Abbasids, and the Ottomans. Of course, there were a few pious kings in those dynasties, but that is the exception that proves the rule.

[5] (1) Ibn Khaldūn’s al-Muqaddima, translated and introduced by Franz Rosenthal, abridged and edited by N.J. Dawood, with a new introduction by Bruce B. Lawrence (Princeton University Press, 2005), p. 116 – with edits by the translator of this volume.