International Conference: JSM Commemorates the Fifth Anniversary of the Passing of Imam Yassine 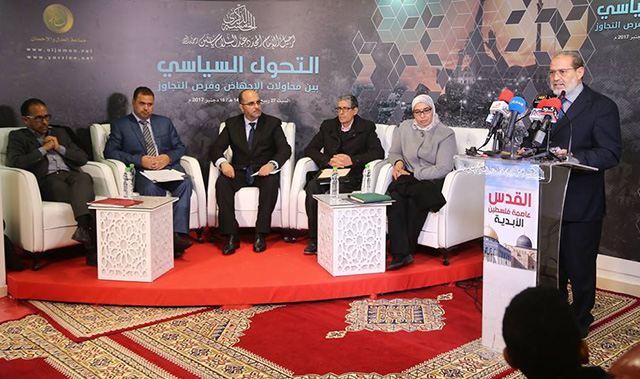 The international political landscape is plagued with violence, hate and tension. The local contexts in many countries is no better. Local dictators and foreign interventions are fueling inner fighting and popular divisions in many parts including Syria, Yemen, Libya, Egypt, Myanmar, Iraq, Afghanistan, and the list goes on.  The latest unilateral decision of the US president, Trump, recognizing Al Quds (Jerusalem) as the capital of Israel, is a flagrant example of how foreign interventions, especially on the part of the successive American administrations, often rubs salt into the open wounds of other nations. Meanwhile, other countries, particularly in the Arab region, have not yet come to the surface of the news as troubled states even though they are deeply ripped with tacit inner divisions, social intolerance, political corruption, and long standing political dictatorship.

One reason why the snow ball of the Arab Spring seems to have come to a standstill is that countries of potential revolution have not yet found in the already revolting countries any inspiring models. Some analysts believe that the “get out” roar will exempt no dictator. The Arab spring spirit has not been turned off; it is just on the standby mode. People are simply plucking up courage and learning from the open book of experience offered by events in recently rising up nations. More importantly, they are bracing to squarely lift the challenge of procuring total change or even transformation, which begins with raising awareness, toppling despotic regimes, and then invests heavily in facing up to the cross-border interventions which join forces with the anti-change forces inside to abort people’s struggle for freedom, dignity, and social justice.

The daily unfolding events incrementally testify that local dictators in many countries are mere epitomes, exact miniatures of international dictatorship and multinational hegemony. It seems that deposing the tyrant is like beating the war drum; the battle is yet to begin. Local dictators such as Bachar Assad of Syria, Mubarak of Egypt or Ali Saleh of Yemen have all been backed by foreign governments. Even though they might be overthrown, the foreign serum keeps them alive. Puppets would only stop quivering if the fingers manipulating them are completely neutralized.

Imam Abdessalam Yassine could be cited as one of the most renowned scholars who have furnished a full-fledged theory for understanding and approaching the period before, while and after change. His futurist overview does not only provide a road map for those aspiring to achieve substantial change both individually and collectively. He also extensively approaches the post change period; that is, when the chapter of oppressive rule is closed. He theorizes  on how peace, dignity, coexistence and justice could be brought about and sustained. Imam Yassine foregrounds Dialogue not only as a tactic to get to power or to momentarily iron out emerging differences. He opts for dialogue as a strategy, as a built-in mechanism that he stresses should permeate the entire human life, beginning with child-parent relationship to span international relations.

Imam Yassine wrote a big number of books in addition to other memorandums, articles, and textbooks. However, he was not only a man of word. He took action as well. He relentlessly spoke out against injustice. Consequently, he spent years of his life in prison and others under house arrest. He was denied access to the media and his books were banned on the Moroccan book shelves. Against all odds, he formed the Justice and Spiritualty Movement (JSM) which then became a key player in the Moroccan Sociopolitical landscape even though it has always functioned outside the formal institutions of the state. The JSM is currently recognized as one of the leading movements in the Arab-Islamic world, most known for its hardline resistance to political dictatorship and social injustice. It is equally known for its highly disciplined members and their spiritual rigor.

At first glimpse, there seems to be a sparkling paradox between calling for dialogue and pluralism on the hand and theorizing for massive popular uprising to unequivocally tear down dictatorship on the other. It does not, in fact, take much thumbing through Imam Yassine’s books to find out that he meant dialogue with the other who might be ideologically and socially different or politically rival, but is still morally upright and could be considered an agent of nation co-building. The unfolding events of today’s insane world increasingly urge us to pay tribute to icons such as Imam Yassine and to honor his legacy in the fifth anniversary of his death (13th December 2012). He lived for the human being and bequeathed a two dimensional theory of full human salvation spanning today’s world as well as human life after death.