– The Prophet (God bless him and grant him peace) said: “Whoever reads Hā’ Mīmal-Mu’min [Chapter 40, Verses 1-2] and Ayat al-Kursī [Chapter 2: 253-4] in the morning, he will be preserved by them [from evil] until the evening, and whoever reads them in the evening, he will be preserved by them until the [following] morning.” Hadith narrated by at-Tirmidhi and Ibn as-Sunni (God have mercy upon them). 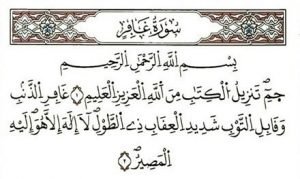