The Night Journey and Ascension of Prophet Muhammad 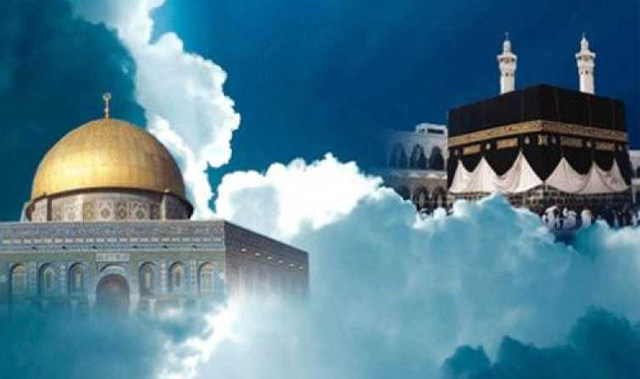 isra’ and mi’raj is the night journey and ascension of Prophet Muhammad, God bless him and grant him peace, from Mecca to Jerusalem then to the Farthest Boundary in Heaven. Specifically:

– israa’ which means night journey in Arabic, is the land-to-land Prophet’s night journey from the Sacred House in Mecca to the Aqsa Mosque in Jerusalem (mentioned in Quran 17:1).

– mi`raaj which means ascension in Arabic, is the land-to-heaven Prophet’s ascension from the Aqsa Mosque in Jerusalem to the farthest boundary of the highest heaven (mentioned in Quran 53:11-18), that occurred right after the israa’. The highest heaven is the 7th heaven, and its farthest boundary is marked by a lote tree (sidrat al-muntahaa) where the Archangel Gabriel, peace be upon him, stopped and couldn’t pass. Only the Prophet was able to go beyond it.

It is not known how long exactly the Prophet’s night journey lasted other than it was all completed during a single night.

In his night journey, Prophet Muhammed, God bless him and grant him peace, travelled physically while awake (not while asleep in a dream) on a speedy pure white beast (called al-buraq). He was accompanied by Archangel Gabriel, peace be upon him.

The hardest year on Prophet Muhammed, God bless him and grant him peace, is called the year of sorrow when he lost his first beloved wife Lady Khadija, God be pleased with her, and his uncle and protector Abu Talib. During such year, which was after 12 years of preaching in Mecca, he was rejected by his Meccan tribesmen. Then, when he went to the city of Taif (about 50 miles southeast of Mecca) seeking support and protection, not only was he rejected and insulted by its leaders but also assaulted and even injured by its slaves and kids. 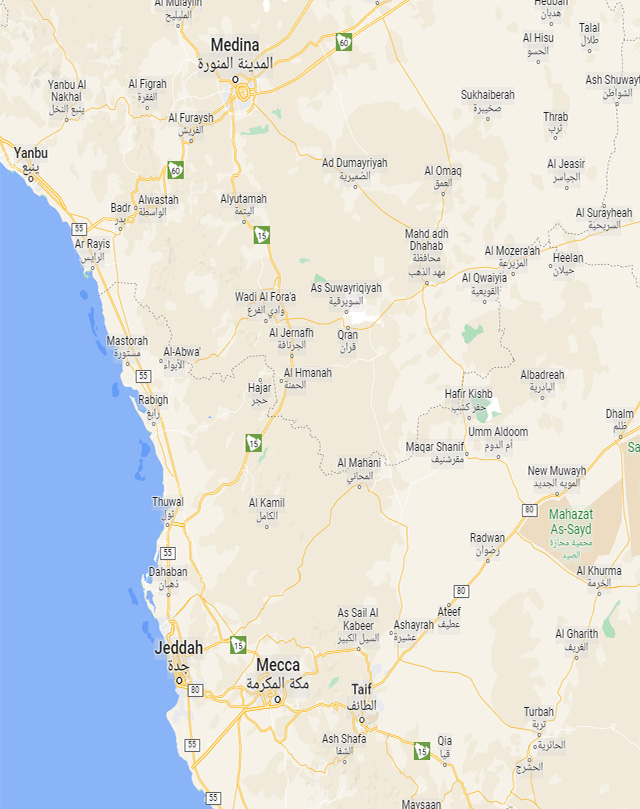 In the midst of all these hardships, Prophet Muhammed, God bless him and grant him peace, did not give up and was in very much need of support to further strengthen his faith, hence came the night journey as a gift and a sign of such support from his Lord Almighty.

Narrated Lady ‘Aisha, God be pleased with her, that she asked the Prophet, God bless him and grant him peace, “Have you had a day harder than the day of the battle of uhud?” He said, “Your tribes caused me a lot of suffering the most of which occurred on the day of ‘Aqaba when I presented myself (with the message of Islam) to Ibn `Abd Yaaleel Ibn `Abd Kulaal (one of the chiefs of Ta’if) but he did not respond to my call. So, I departed with deep sorrow and did not relax until I arrived at qarn ath-tha‘aalib where I raised my head and saw a cloud shading me. Then, I looked up and saw Gabriel in it. He called me and said, ‘God has surely heard what your people said to you and what their response was to you, and He has sent the Angel of the Mountains to you so that you may order him to do to them what you wish.’ Then, the Angel of the Mountains called me, greeted me, and said, ‘O Muhammad! Order what you wish. If you like, I will bring al-akhshabayn (two mountains standing opposite to each other at the extremities of Mecca) down to crush them in between.’ But the Prophet, God bless him and grant him peace, said, “No, I rather hope that God will raise from among their descendants those who will worship God Alone, and will worship none other than Him.” (Reported by Bukhari and Muslim)

God Almighty blessed His Prophet with a miraculous night journey to comfort him (after the aforementioned hardest year and day on him), support him in heaven (after he was rejected on earth), further strengthen his faith (by reaching and seeing no else can reach or see), and so prepare him for a new challenging mission, which was the migration from Mecca to Medina to establish the first Islamic state.

The Prophet’s night journey is important because:

– “Glory be to Him Who carried His servant by night from the Sacred Mosque to the Aqsa Mosque whose environs We have blessed, so that We let him see some of Our signs. Surely, He is the All-Hearing, the All-Seeing” (Quran 17:1). “Who carried” implies that the Prophet did not plan for this journey; instead, it was a gift from his Lord Almighty. “His servant” implies that the Prophet was a role model devout servant to His Lord Almighty.

– “The heart (of the Prophet) did not deny what he saw. Do you then dispute with him in what he saw? And he certainly saw him (the angel) descend a second time, by the lote tree of the Farthest Boundary (sidrat al-muntahaa), near which is the Garden of Residence, when the the lote tree was covered by that which covered it. The eye (of the Prophet) did not go wrong, nor did it transgress its limit. He (the Prophet) certainly saw some of the greatest signs of his Lord.” (Quran 53:11-18)

The main lessons that you can draw from the Prophet’s night journey include:

Trust and Certainty in God:

Despite the extreme hardship the Prophet went through, he did not give up or lose his trust in his Lord Almighty Who not only supported him but also honored him and prepared him for something even bigger: the next phase of his mission, which was to establish the Islamic state in Medina. So, you too should have full trust and certainty in God’s infinite ability to support you no matter how difficult or impossible the hardship you are going through seems. He is the Omnipotent!

The aforementioned verse (Quran 17:1) on the Prophet’s night journey starts with the word subhana which means “glory be to God” Who blessed His beloved prophet with such amazing miraculous journey. So, always praise and glorify God for His countless blessings on you.

Prior to his night journey, when the Prophet was in deep sorrow and distress, and so in great need of much support, he made an emotional and powerful supplication (see below). So, you too should supplicate to your Lord Almighty all times especially in time of great need.

Given its UTMOST importance, salat was commanded by God to His prophet beyond the UTMOST Boundary of heaven, with a tenfold reward. So, you should perform it five times a day, on time, and whenever possible in congregation in the mosque.

Even in heaven, Prophet Muhammad, God bless him and grant him peace, practiced shura and listened to the expert for the best interest of the umma. The expert in this case was Prophet Moses, peace be upon him, who kept advising him to go back to his Lord Almighty and request that the number of daily obligatory prayers be reduced from 50 until they were only 5 (with the full reward of 50). So, you too should consult with and listen to the experts in the field with the intention of doing what is best for the group even if it is opposite to your own opinion.

Universality and Eternity of Islam:

The Aqsa Mosque was the place of worship of several Prophets such as Abraham, Isaac, Moses, and Jesus, peace be upon them. So, the fact that the Prophet lead all previous prophets in the Aqsa Mosque, not in the Sacred Mosque, the birthplace of Islam and its local audience, shows the universality and eternity of Islam. What an honor for us, Muslims, that we belong to the umma of the Final Prophet and leader of all Prophets!

The Prophet, God bless him and grant him peace, did what he did and suffered a lot because he cared about all creation. He was given the chance to punish and destroy those who had assaulted him, but he did not. His main concern was to guide the creation to God. So, you too should be caring and have the same main concern. Guiding to God is the best way of caring about others!

When the Prophet, God bless him and grant him peace, returned from his night journey and ascension, his companion Abu Bakr, God be pleased with him, was asked if he believed that such journey had really taken place. He replied: “If he (the Prophet) said it then he said the truth. Surely, I shall believe in that which is even more serious than that.”

You too should believe that whatever Prophet Muhammad, God bless him and grant him peace, said or did is the truth and that it in your best interest both in this life and the next.

God Almighty took His Prophet from earth to heaven, showing the importance of the hereafter. This life is but a test and an important bridge to the hereafter, however, the latter is more importance because it is your everlasting destination.

Upon being rejected and assaulted in Taif and while being bruised with his blood thickening as it was seeping onto his sandals, Prophet Muhammad, God bless him and grant him peace, went under the shade of a tree and performed a two-unit prayer, then made the following emotional and powerful supplication to his Lord the Omnipotent:

“Oh God, To You, I complain of my weakness, lack of my resources, and my humiliation before mankind. Oh God, the Most Merciful of those who show mercy! You are the Lord of the weak, and You are my Lord. To whom do You entrust me? To a distant person who attacks me? Or to an enemy You gave control over my affairs? If I do not incur Your wrath then I do not care, but your protection is much sufficient for me. I seek refuge in the light of Your Face by which darkness is illuminated and all affairs of this life and the hereafter become righteous, against incurring your wrath or earning Your dissatisfaction with me. To You I appeal until You are pleased. And there is no change or strength except by You.” (Narrated by Tabarani)

Prophet Muhammad, God bless him and grant him peace, was blessed with the miraculous ascension to the farthest boundary of the highest heaven to meet his Lord Most High.

You cannot ascend physically as the Prophet did, but you can ascend spiritually towards achieving nearness to your Lord Most High every day at every time you perform your ritual prayer (salat). Salat is ascension. That is because during salat you meet with your Lord to glorify him, thank Him, praise Him, recite His words, seek His support and guidance, ask Him for forgiveness, supplicate to Him, seek His love and satisfaction, bond with Him, hence ascend and achieve nearness to Him.