The Rights of Woman in Islam 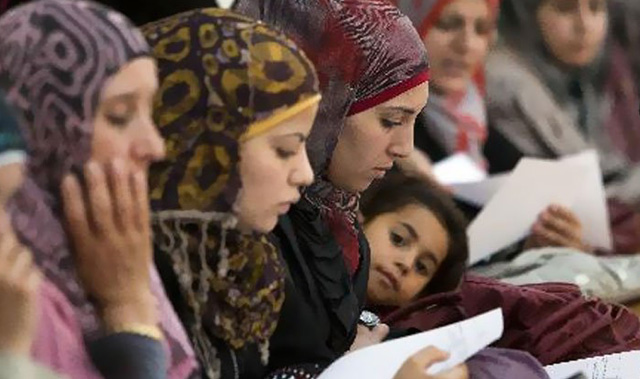 Excerpt from “Muslim Women: Journey into the Light V.2”
Translated from Arabic by Farouk Bouasse

The principle of specialization and division of labor is both a natural and a rational one. Any factory that does not apply it is bound to close its business since productivity will decrease, causing it to lose its market share. Any institution that does not train specialists and technicians to do their jobs with competence and expertise as well as managers responsible for supervision and coordination is bound to go bankrupt. Despite this, the advocates of “women’s emancipation” deny this principle and insist that the woman must measure up to the man shoulder-to-shoulder and contend with him in his own fields even though his own physical and psychological constitution do not enable him in turn to vie with her in her own natural fields of specialization. They deny the need for complementariness and the possibility of a life in harmony different from the lifestyle of competition between the man and the woman – one that eventually, after a bitter struggle, turns the woman into an exploited, fetishized doll.

These people generally disavow the rulings of Islamic Law because they are alienated from the dīn, although the women hypocrites among them teach their herds of women activists to always open their speeches with “In the Name of God, Most Gracious, Most Merciful” and to bless the Prophet whenever his name is mentioned. Perhaps you will find them, once Islam’s stock has gone up in the political market, wearing abayas and covering their heads to claim their place as the vanguard of the Islamic demonstrations. But hypocrites, men and women, are naturally disposed to hatching schemes and intrigues. In general, they disapprove of the rulings of Islamic Law and in particular abhor the idea that man should have a “degree”: this word must be rescinded from the Qur›ān since men have arbitrarily used it. The caravan is led by a captain who schedules the itinerary of the group; the caravan may include scholars and virtuous women who surpass the captain in certain fields, yet no one can dispense with the captain given his expertise and inherent skills.

To repair the damage occasioned by those who have applied Islamic Law arbitrarily and to restore the rights which the woman has renounced out of ignorance cannot be done by trying to change the immutable Law. It is human beings who deviated from the Sacred Law, hence it is they who must be brought back to its observance through exhortation and having the fear of God put in their hearts. Exhortation entails educating people, inviting them to repent, and endearing Islam to them. This is the duty of the believing women and the first thing they owe their fellow women in general. After exhortation – which is mentioned first because of the need to move progressively, not because it holds precedence – the State must surround the garden of īmān (planted by the Call (1)[Translator’s note:] Throughout the book, the Islamic Call (Da‹wā) is used to mean both the general call to Islam as well as the Islamist movements’ call to their Islamic project. Sometimes, as in this context, it refers to the Islamist movements themselves. ) with an awe-inspiring and protective fence of punishments and rewards.

Islamic Law is not a code that should be imposed on people by the authority of the State. That is why the need for the Call’s educational mission can never cease. Inviting people to God through teaching and exemplary conduct is the only means to make people observe the ethics of Islam and hasten to give all men and women their due rights. God forgive me! It is more proper to say that it is the Exalted Maker who guides the hearts. Nevertheless, education and exemplary conduct are indispensable. An educational field ought to be prepared wherein the plants fertilize each other and the fruits of revering God can grow. A healthy space ought to be built wherein souls can receive therapy. A sound environment ought to be fostered whose soundness pervades its visitors, incoming and outgoing. Sessions of īmān ought to be organized wherein the Lord (Exalted is He) is remembered and revered, wherein the Qur›ān is recited, and wherein the believing man and woman can turn to God. In the land of īmān, with the soil of the Lord’s reverence, the fertilizer of love for Him and His Messenger, and the moisture of boundless generosity for His sake, the plants of pious deeds will be cultivated. In such an environment, the believing man and woman will assume their own charge. They will embark upon righteous enterprises and abhor repulsive undertakings. In the ideal sound environment, the disparate elements of our society merge and cohere.

By contrast, in the mindset that classifies man as an ape, you find rights separated from duties, politics divorced from religion, and ethics divorced from public affairs. In the follow-the-leader mentality inherited in our countries from centuries of underdevelopment, Islamic jurisprudence has set high objectives (2)[Translator’s note:] Islamic Law’s high objectives (Maqāṣid ash-Sharī‹a) are five: the preservation of dīn; the preservation of life; the preservation of property; the preservation of reason; and the preservation of offspring. , but no one has claimed them as their responsibility. You find an abundance of imitative knowledge that stands between the masses and the source of their guidance: the Qur›ān and Sunna. You find knowledge without resolve. You find resolve without knowledge. In the battlefield where good fights evil, there reigns the specter of killer soldiers who proclaim the modern religion: democracy, human rights, and women’s rights. But never ask who you are, where you come from, or where you are going!

Surely you came from somewhere and surely you will move on to somewhere! In reality, you were brought to this world without having been consulted. Similarly, you will be taken back at a time and place hidden from you. Islam informs you about who you are and where you will go in the Hereafter and enlightens you about your rights in this world so that you can mobilize your fellow Muslim women and strive against the apostates, men and women.

The Muslim woman is not obliged to take part in the military jihād unless there is a general mobilization because the enemies have invaded our lands. In the modern age, they did indeed invade and occupy our lands before departing and leaving their protégés. So a general mobilization is for a jihād where the believing women occupy the front lines. But the jihād that is required now is one of knowledge whose weapon is wisdom, not daggers. Daggers can only kill individuals who will soon be replaced by a large reserve of tyrants. It is a twofold jihād: Firstly, you have to wrest away from the man’s arbitrariness the rights that Islamic Law has guaranteed you and acquire knowledge so that he does not monopolize ijtihād and make arbitrary use of his “degree.” Secondly, you have to repel the campaigns against Islam from your own fronts.

The women apostates accuse our dīn of being unjust because of the rulings on the woman’s share in inheritance and the amount for her blood money. They raise doubts about a faith that made the testimony of one man worth the testimony of two women. Therefore, believing woman, you have to acquire the instrument of knowledge and the weapon of wisdom to testify boldly and firmly that Islam did not make the testimony of one man equal to that of one woman because the woman is the pole of compassion, affection, and tolerance and is not used to quarrels or trying to figure out the underlying causes of disputes in the marketplace. By your dauntless stance as you undertake the duty of jihād, you will attest to how the women Companions were not absent from the decisive battles of Islam, but were there in the army reserves ready to take part. And so should you teach and mobilize the illiterate and idle among your fellow Muslim women. And so should you refute the women apostates, for God may guide some of them to the straight path.

Islamic Law guarantees you the right to human dignity, the right to use your money freely, and the right to work in case of need. Islamic Law grants you all the rights necessary to fulfill your major social mission. The other rulings that have prescribed separate duties to the man or the woman ought to be construed as a matter of a division of labor according to the specialization of each – they should absolutely not be viewed as an abasement of the woman by Islam.