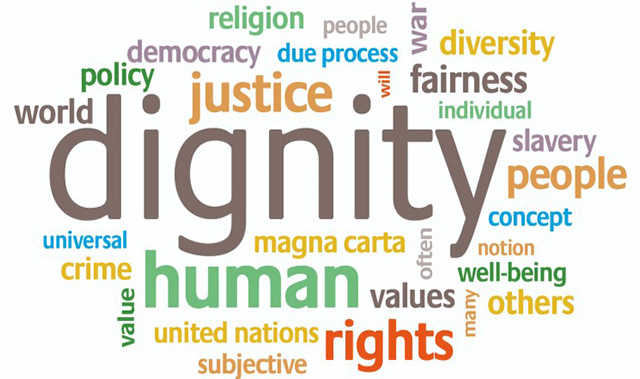 The following is an excerpt from the book “The Muslim Mind on Trial” by Imam Abdessalam Yassine, translated from Arabic by Muhtar Holland. It is about The Human Dignity.

The True Believers bring out to the world the glad tidings:

They adhere to the duties of human dignity in its generalities and particulars. The first of those duties, and the most sacred that honors the human being, is God’s exclusive worship. In the court of Rustam, the leader of the Persians in the first era, one of the Muslims engaged in jihâd said: “God has sent us to bring forth whomever He will from the worship of human divinities to the worship of God, from the hardship of this world to its welfare, and from the tyranny of religions to the justice of Islam.”

This statement was uttered by a soldier from the army of a nascent and potent force. The world will only hear this statement from us if we become strong by God’s help, by our unity and by the establishment of an exemplary brotherly community that inspires people with its purity, justice, prosperity and utmost care for human dignity.

Our statement must be exemplary, attractive, inviting, liberating, and manifest in an entity that is united, so that the Islamic umma may be­come one as God commanded. It must emanate from the Qur’an and the sunna, as a statement that informs every human being of his and her rights. Indeed, it is a statement that is stimulated by faith, not a dictate that is imposed by the strong on the weak.

Good treatment of parents is an imperative duty that comes, in the Qur’anic context, immediately after the duty of the declaration of God’s Oneness. What a loss is the lot of those outcasts in old people’s homes in civilized Europe and strong and prosperous America!

Giving kinsfolk their due is one of the most imperative duties of broth­erly mutual aid. The kinsman has a right. The needy has a right. Whether he begs with his condition or his speech, the beggar has a right.

These gaps in the modern legal and social structure are not filled by the state. They are rather filled by the close, loving and sympathetic hand that draws near, by means of kindness to the people, to the Kind, Gentle, Compassionate Master.

Modern civilization is cold and inhumane. It makes the prosperous increase in egoism, and the wretched in old people’s homes and the streets of New York increase in misery.

Paying debts for the indebted is part of jihâd. The umma is legally indebted. We are imprisoned by the international capitalist law, over­whelmed by foreign debt and usurious interest—a disgraceful mark on humanity’s face and a worshipped idol in the temples of the modern era.

Squandering and the misappropriation of Muslims’ wealth are harder than successive natural catastrophes. Recovery of the umma’s body is impossible, so long as it is bled white by such practices.

The requirements of Islam include speaking well to the human being, bringing up children in kindness and care, and teaching them the prin­ciples of faith and chivalry.

One of the rights and duties of human beings is that every man and woman is accountable for those under his or her charge.

Mutual enjoining of what is right and proper and condemning what is wrong and improper are a duty and a right.

Shûrâ and justice are a compulsory prescription.

Kindness to those you know and those you do not know is a lofty virtue, whether they be human beings or any living creatures. In the Prophet’s Tradition, a man entered Paradise thanks to a dog whose thirst he quenched, and a woman entered Hell because of a cat she deprived.

Among the Islamic duties is the condemnation of what is wrong and improper and mutual assistance in fighting it.

“Do not associate partners with God. Ascribing partners to Him is a tremendous wrong.” (Q. 31:13)

Such is the first advice Muslims must give to one another. Then do not disobey your parents, do not commit perjury, do not flee from the battlefield, do not squander, do not lie, and do not be hypocritical.

Do not kill the soul that God has made sacred, except by way of justice and law. Do not commit adultery and fornication. Do not ap­proach indecencies whether apparent or secret. Do not approach the property of the orphan except to improve it (until he attains the stage of full strength). Do not fail to give measure and weight with full justice. Do not use double-standard policy, for that is unlawful.(1)Such commandments are derived from the Qur’an. See Q. 6:151, 152 for comparison. Your Lord has decreed that you must not worship any but Him, and to be good to parents. (Q. 17:23)

From these sacred principles begins the responsibility of every Mus­lim and the true Muslim state, by reading in the Qur’an and the sunna what God prescribed for everyone with regard to responsibilities, du­ties, individual and collective obligations, justice, ihsân,(2)The word ihsân is used here with its three meanings and dimensions: The highest spiritual station of Islam The virtue of doing good and being kind to parents and relatives The virtue of doing one’s assigned duties with perfection and conscientiousness. shûrâ, broth­erhood and mutual compassion between human beings.

That is a sacred reading of sacred duties. In this world where politics is given priority over morality, those politicians who call for morality and human rights are hypocritical opportunists. Men and women of integrity and morality among them are marginalized.

The Islamic wisdom, lost and sought, responds to the question: “How can the conscience of Muslims meet with the morality of men and women of integrity and good will in the world? How is the hand of truthfulness to be extended among all those who are virtuous and free?”

Imam Umar ibn al-Khattab (may God be well pleased with him) was cautious and alert. He used to say: “I am not an impostor, and an impos­tor would not deceive me.” This is one of the answers to the question. God is the One from Whom help is sought!